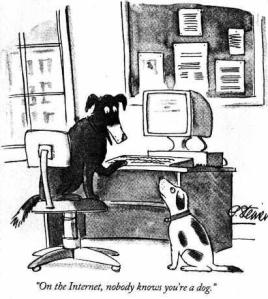 As we all know by now, Google+ has a policy of only using real names (real world identities) in profiles. And they’re enforcing that policy with a big lumpy banstick.

This is causing much angst, a lot of gnashing of teeth. However it seems that the technorati, as well as the Googlers (and Facebook before them) are unmoved by the arguments, and sincerely puzzled by the outcry. What’s the big deal? Just create another profile, for crying out loud.

The big deal is that we are having an identity related clash of values, I think, between two very different kinds of heavily engaged online people:

The integrated identities tend to work in the web 2.0 universe. Silicon valley seems to be the cultural center of this. They meet the same people online and offline; people who have startups, tech bloggers, money guys, opinion leaders of all kind. Their identity is their primary asset, it’s got their reputation attached to it. To them, it’d be mad to have a separate online and offline identity, and seems kind of sinister; what reason could you have to split your reputation, really, other than that you are trying to hide something?

But the separate identity people are actually part of an older tradition (and yes this environment is old enough to have an older tradition). It’s the tradition of the Handle, and it comes from back when computer networks were esoteric, back when using them was a marker of class. Back before Eternal September. I think that culture began because the people you’d meet online (be that bbs, or compuserve, or whatever) were exactly people that you’d rarely meet in real life; that was the beauty of the networks, that you could meet interesting, intelligent people who you would never otherwise have access to, but with some other, better kind of proximity; shared interests, shared tastes, shared culture at some level.

I feel like the people lucky enough to live and work in the exciting geographic centers of the web 2.0 world, who do mix with the same people online and off, who all “get it”, are missing that the great majority of us live in a very different world. The types of people with a pseudonymous online life tend to live, I think, in geographical environments very unlike their online worlds. These are conservative, sleepy parts of the world, where the normal people they meet in everyday life, the family members that they love, the work colleagues they go drinking with, are largely clueless about and uninterested in the online world.

Separate Identity netizens aren’t participating in online life as an economic activity, or for networking per se; it’s really purely social. They are doing it for fun, for connection to other people who get it, for self expression. To that end, a Handle is a badge, a marker to say “I belong”. It also communicates something about the online personality (probably often as distinct from the offline personality).

There is no doubt that Separate Identity is also about keeping the identities separate, hiding one from the other to some extent. And there’s a continuum here, between people who use a pseudonym for self expression, and those who use it for far more serious reasons (like hiding from abusive stalkers, or so they can speak candidly about people in their lives, or to protect themselves from discrimination in their communities or workplaces).

I personally go by my real name, but I’m sympathetic to Separate Identity, and still partially am a Separate Identity person. Offline I’m Emlyn O’Regan, online I’m Emlyn, the virtual person. I tried using handles in my very early engagements with the online universe, but found I was too lazy to keep it going; I decided instead to make my own name into my online “brand”, let the worlds clash where they will, and deal with the fallout as it comes.

It turns out that’s been a really good decision. I was in a better position, when the web 2.0 social network storm hit, to just let loose and not worry about these issues, than many of my pseudonymous friends. But it’s still difficult. A google search on my name will dredge up a long google shadow, and while that might be cool in the context of my netizen status, to folks embedded heavily in RL it can be something that asks questions and engenders suspicion. What’s all this weird stuff he talks about online? Why does he spend all this time doing unpaid technical stuff? What’s with the weirdo anarchist/socialist tendencies?

Now I’ve chosen to just wear that stuff, and let it act as a real life filter. If you don’t like my prodigious output on frivolous social networking sites, and choose not to employ me for that reason, then maybe I’ve dodged a bullet (ie: maybe you make foolish decisions and would have been a shitty boss). But my choices are unusual.

More common in my experience is that people choose to hide parts of themselves from their real world contacts in order to live the life they want to live. Maybe you decide not to let your family know of your anarchist tendencies? Maybe the tell all blog about your relationship is something you really don’t want your partner to read? Maybe you need to discuss your atheist convictions, but not have that connect with your deeply conservative, christian employer?

For many netizens, Pseudonyms are just a way to separate concerns, to keep distinct namespaces. Forcing people to collapse these identities into one may seriously damage this, and probably end up diminishing their lives. This is especially true for those who treasure their online identity more than their offline one.

Also, many long time users of pseudonyms have serious reputation capital invested in their pseudonyms. Forcing them to rename themselves is flushing this down the toilet. It’s also potentially breaking their own relationship networks; if they are only known by the pseudonym, it might be very difficult to reestablish those ties. Certainly in the Buzz community, a crowd of google cheerleaders and fanbois, the move to Google+ has been a mixed blessing, as the banstick wreaks havoc and maybe permanently damages the fabric of the community’s relationship graph.

Something else that Google (and other Integrated Identity techies) might want to consider is that people will continue to use pseudonyms. You might try to enforce real identities, but people gain value from their nicknames, and will find ways around your restrictions. The same thing applies to a large social network that applies to any large information system in which end users are being forced by policy to do something against their interests; they will rebel against the policy and fill the system with garbage, garbage that better aligns with their interests. In a work monitoring system, for example, you get stuff like bogus hours worked, weird job codes. In a social network, you’ll get real looking fake identities, and a culture of breaking the system for the lulz.

One last point for integrated identity people: you are the minority. Separate Identity is not the weird old past of the net, it is the present. The most switched on online people are Separate Identity. Look at the gamer communities and the persistent use of handles. Look at the Mommy Bloggers. Look at old email lists and usenet groups. The only subcultures that I can think of that are committed to real identities online are

I know you guys want to change the world. I do too. But you need to absorb a truth, and that is that the Separate Identity culture is here for a *reason*. Its benefits far outweigh its drawbacks. On the internet, no one knows you are a dog, and that’s a really good thing.
You want to help people rebel against tyrants? Talk openly about their thoughts and beliefs and fears? Connect with new people, learn new things? Imagine and discuss and create a new and better world?
Then embrace the Separate Identity. It’s the right thing to do, it’s the good thing to do. And who knows? You guys might need it too one day.

Google+, the pseudonym banstick, and the netizen cultural schism.

56 thoughts on “Google+, the pseudonym banstick, and the netizen cultural schism.”